She is currently self- isolating alongside her boyfriend Ercan Ramadan, 26.

And Vicky Pattison, 32, showcased her very taut abs in a cheeky Instagram snap shared on Friday where she admitted to feeling bored.

The reality star posed in a black sports bra teamed with slouchy grey joggers that she held down to fully expose her flat stomach.

Comfy: icky Pattison, 32, showcased her very taut abs in a cheeky Instagram snap shared on Friday where she admitted to feeling bored

She swept her brunette tresses into a casual bun and opted to go makeup up free looking naturally gorgeous.

To accompany the snap, Vicky wrote: ‘Bored in the house and I’m in the house boreddddddd….  Ps yes I live in these joggers now’

Her caption uses lyrics from a song by Tyga x Curtis Roach which has been hailed as a ‘quarantine anthem.’ 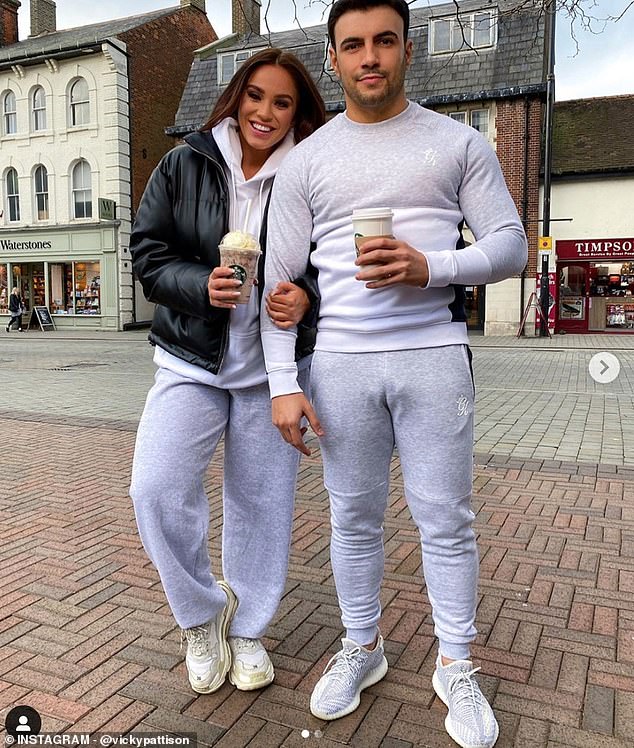 Cute: The reality star posed in a black sports bra teamed with slouchy grey joggers that she held down to fully expose her flat stomach, she was seen wearing the same joggers earlier this week

Earlier in the week, Vicky Padmitted she’s had her ‘fair share of bust-ups’ with boyfriend Ercan and even his breathing is irritating her in lockdown.

The Geordie told MailOnline isolating with Ercan is the biggest test of their relationship yet and she’s ruled out starting a family with the property developer for the foreseeable future.

In an exclusive interview, she said: ‘I’m so in love with him but oh my God, anybody isolating with a partner will completely sympathise with me. We are just rubbing each other up the wrong way.’ 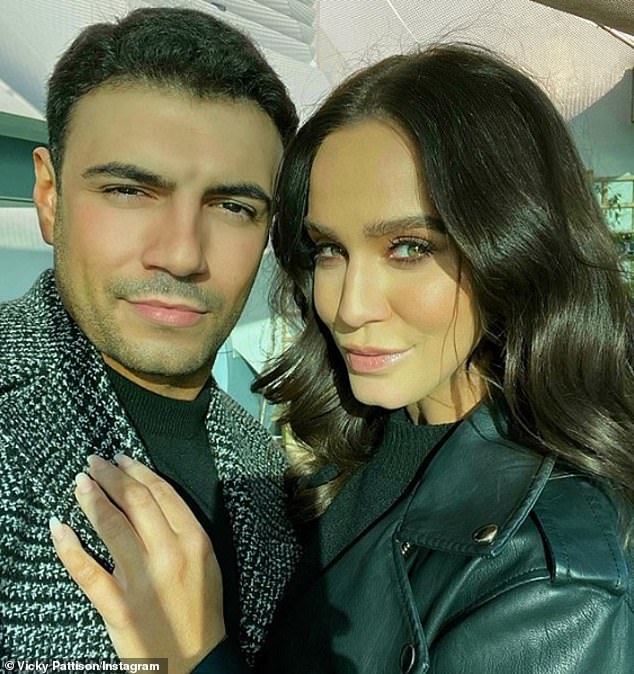 ‘We’re only human’: Vicky Pattison has admitted she’s had her ‘fair share of bust-ups’ with boyfriend Ercan Ramadan and even his breathing is irritating her in lockdown

Vicky moved into a rented property in east London with Ercan last August as a way of testing their compatibility while living together.

After that proved a success the couple relocated to Vicky’s apartment in Brentwood, Essex, where they’re now in lockdown.

She said: ‘I’m looking at Ercan and thinking: ‘Have you always breathed like that?’

‘It’s so difficult. I’m not living in a Kim Kardashian mansion with eighteen bedrooms to go and seek refuge in if we go and have a row. 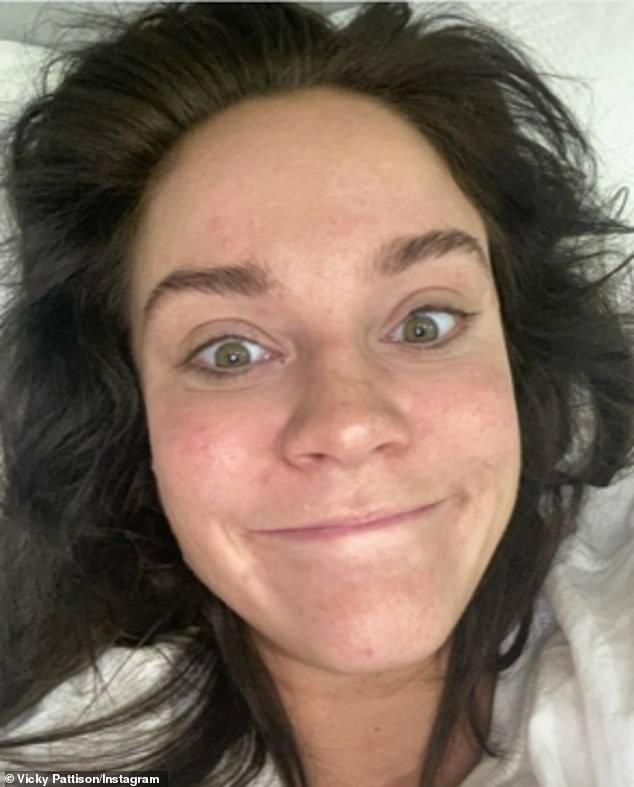 ‘We are just rubbing each other up the wrong way’: The Geordie told MailOnline isolating with Ercan is the biggest test of their relationship yet and says the pair aren’t ready to have kids

‘I’m used to being such a busy person and seeing different people and living my life at a million hours an hour.

‘And the change – this transitional period, it’s making us both a bit cranky.

‘We’ve had our fair share of bust-ups. We’re only human.

‘I’m used to doing things a certain way and having my own space, being on top of each other and having to take a slower pace, it’s a shock.

‘Bless him, he’s putting up with a lot at the minute. We’re going to see a lot of breakups.

‘I’m so thankful for Ercan though, I could have been stuck with one of my ex-boyfriends!’ 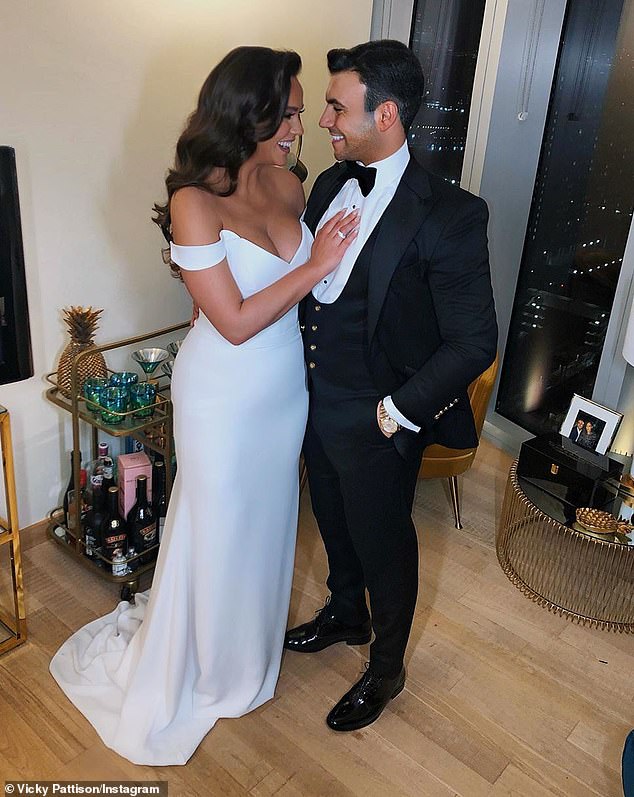 Happy couple: The TV star says she’s so in love with her property developer boyfriend and is thankful she isn’t cooped up with one of her ex-boyfriends

The TV star found love with Ercan three months after dumping her cheating ex-fiancé John Noble, who was caught getting close to other women in Dubai.

She was left devastated after believing she found The One in John following failed romances with Stephen Bear, 30, and former Geordie Shore co-star Ricci Guarnaccio, 33, to whom she was engaged.

‘Our relationship was born in chaos,’ she explained.

‘I don’t want to compare the two at all but Ercan and I got together in pretty chaotic circumstances.

‘We were spotted out together relatively early doors in terms of the stages of our relationship.

‘But I am enjoying spending more time with him for the most part. 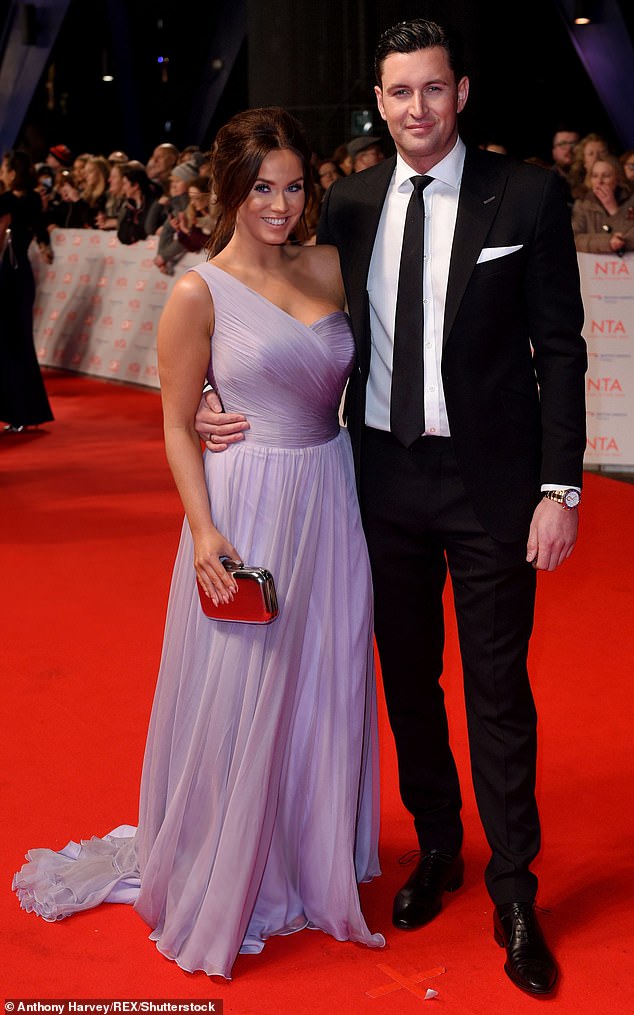 ‘I was due a good one wasn’t I?’: She found happiness with Ercan three months after dumping her cheating ex-fiancé John Noble (pictured January 2018)

‘Everyday he reminds me that I’ve made the right decision so I’m very lucky. I was due a good one wasn’t I?’

Vicky admits despite the couple being in a strong relationship, they’re not ready to have babies together and the last thing she would do is fall pregnant ‘on a whim.’

She said: ‘For ages I have thought that I should be on the road to having children, especially because it felt like I was so close last year and the year before.

‘If I’m really honest with myself, we’re not ready. 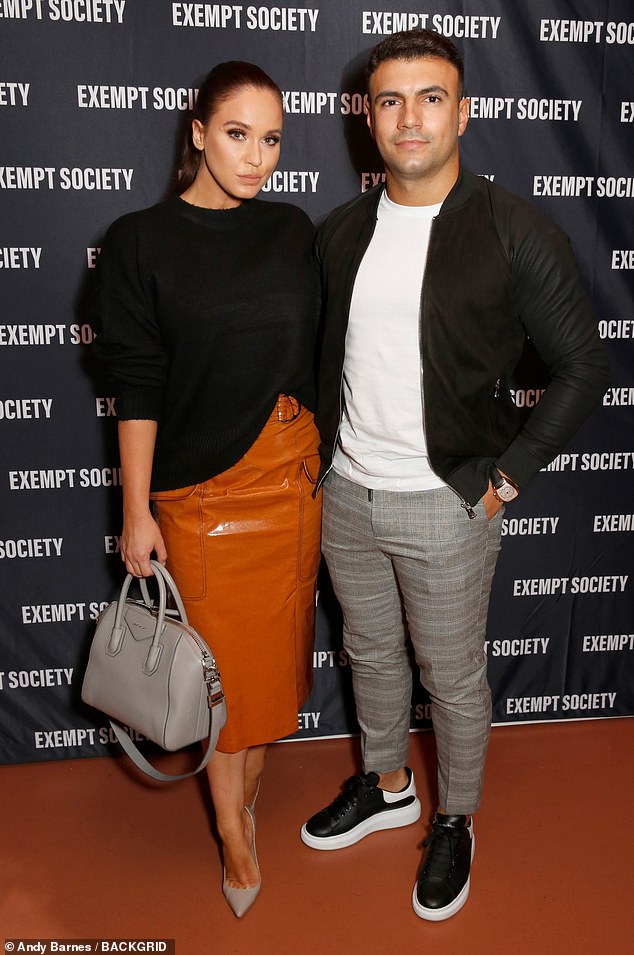 ‘We’re still quite selfish’: Vicky admits despite the couple being in a strong relationship, they’re not ready to have babies together and the last thing she would do is fall pregnant ‘on a whim’

‘We’re still quite selfish, he’s a lot younger than me and there are still so many more things we want to do. We want to explore and travel.

‘I’ve seen first hand how much hard work having children is and I will not be having a baby on a whim.

‘When I’m done with my Tuesday night’s bottle of wine, then I’ll have a baby.’

Vicky, who’s been open about her past struggles with weight, is doing all she can to sustain a healthy diet during lockdown but she also vows not to be hard on herself.

She said: ‘I am upping my exercise. I have a spin bike in my flat.

‘It’s so difficult though, you just have to be realistic with yourself. If a little glass of wine or a bit of chocolate makes life exercise, then so be it. 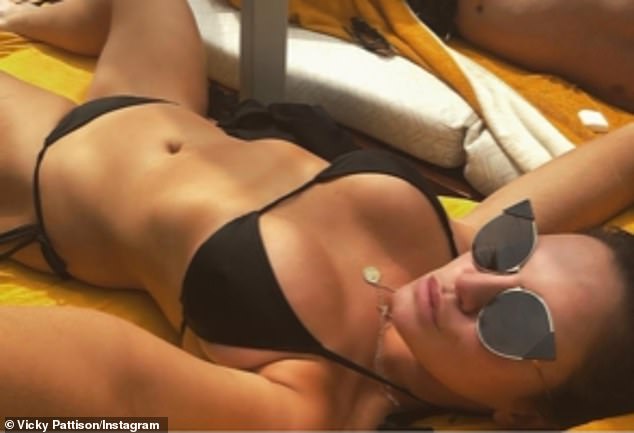 ‘It’s difficult’: Vicky, who dreamed about where she would holiday when lockdown is over, said she has upped her exercise in isolation but won’t be hard on herself when it comes to snacking

‘I was talking to someone yesterday that literally said ‘We have no excuse now, with all this free time to exercise I’m the fittest I’ve ever been.’ All I felt like saying was ‘f*** off. Who are you?’

‘It’s so easy to snack and I am falling into the trap loads, God it is so easy to do. I’m not going to beat myself up about it.’

Vicky has teamed up with breast lift and shape tape brand Perky Pear, who have launched an initiative to raise funds for Women’s Aid, a charity that works to end domestic abuse against women and children.

She explained: ‘I made a promise a couple of years ago that I was only ever going to work with brands that I properly believed in, that I used myself and make me feel really good about working with and Perky Pear personifies all of that completely.

‘They are great products that actually work – I’m a fan of them and so are my boobs. But they really want to help women. 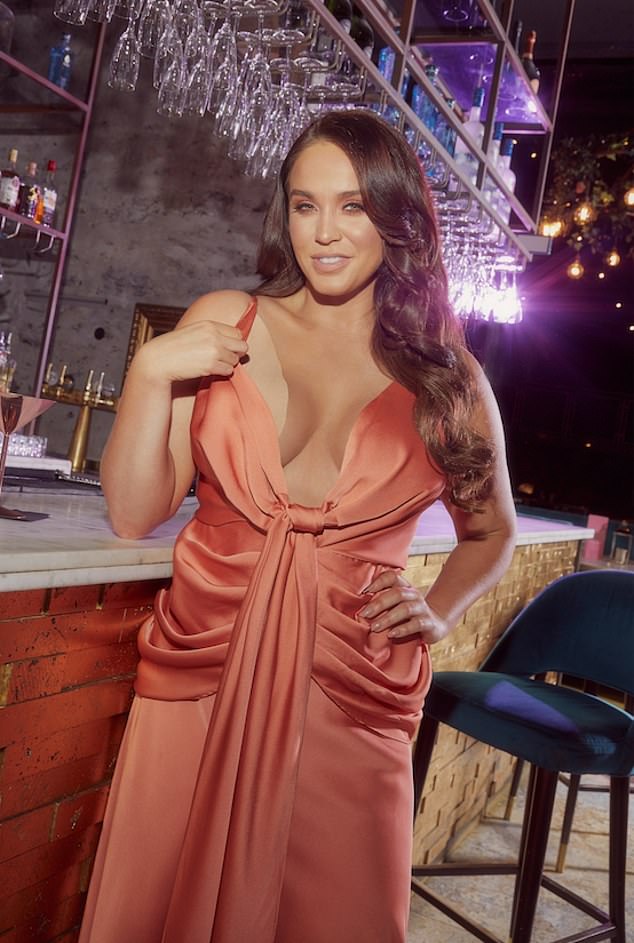 Good cause: Vicky has teamed up with Perky Pear, who have launched an initiative to raise funds for Women’s Aid, a charity that works to end domestic abuse against women

‘They’re shining the light on a more difficult situation and people that actually need our help. That’s where there partnership with Women’s Aid comes in.

‘Everybody is being told to isolate which of course is for the greater good of the country and to make sure normal life resumes as quick as possible.

‘But what we don’t realise is that sometimes we are telling women to be inside 24 hours a day with the people they fear the most in domestic abuse cases. That is such a scary thought.

‘Perky Pear is donating 100 per cent of their profits to Women’s Aid to help cases like that. 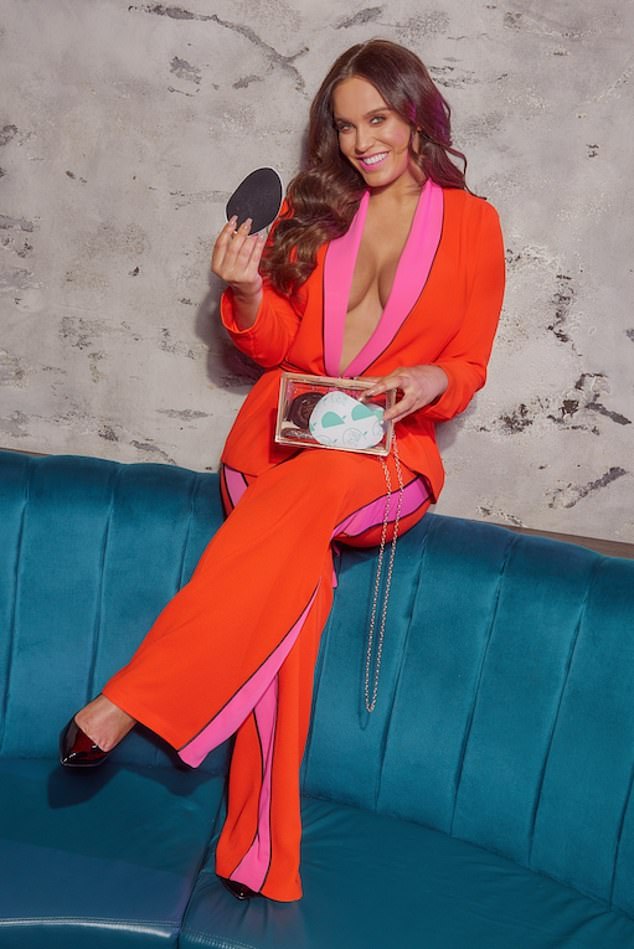 ‘Scary thought’: She says the breast lift and tape brand are donating 100 per cent of their profits to Women’s Aid to help the fight against domestic abuse cases in lockdown