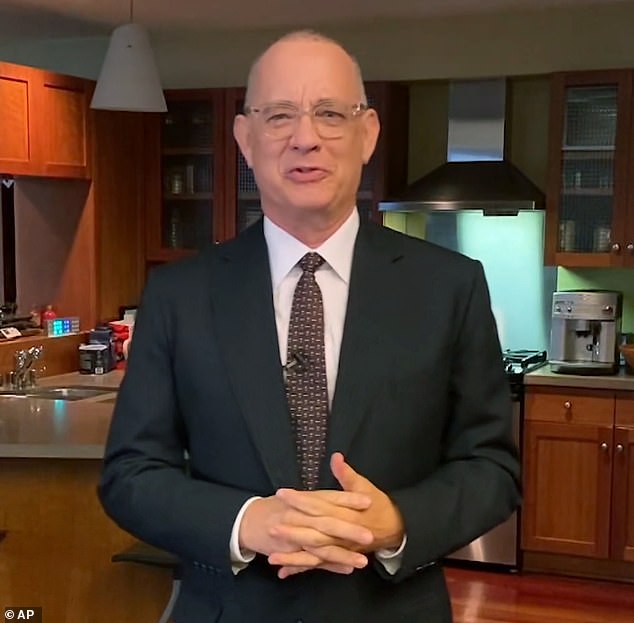 ‘Shame on you’: Tom Hanks has no time for those refusing to wear a mask or practice social distancing during COVID-19 crisis

By Rachel Mcgrath For Dailymail.com

He was the first big name to reveal he had tested positive for the coronavirus.

And on Tuesday, Tom Hanks had a few words for anyone refusing to wear a mask or practice social distancing to help contain the spread of COVID-19.

‘There’s really only three things we can do in order to get to tomorrow: Wear a mask, social distance, wash our hands,’ the A-list Hollywood star said, per People.

‘Those things are so simple, so easy, if anybody cannot find it in themselves to practice those three very basic things – I just think shame on you.’

Take COVID-19 precautions: Tom Hanks had a few words Tuesday for anyone refusing to wear a mask or practice social distancing to help contain the spread of COVID-19: ‘Shame on you’

Hanks, 63, was speaking during a virtual press tour for his new movie Greyhound that premieres on Apple TV+ on July 10.

He stressed that it’s just ‘common sense’ to do what has to be done to keep people safe during the pandemic as cases of COVID-19 surge in the U.S.

He and wife Rita Wilson contracted the virus while in Australia where Hanks was filming Baz Lurhmann’s Elvis Presley biopic.

The couple were hospitalized for several days and then continued their recovery in quarantine.

They returned home to Los Angeles where they continued to self-isolate. 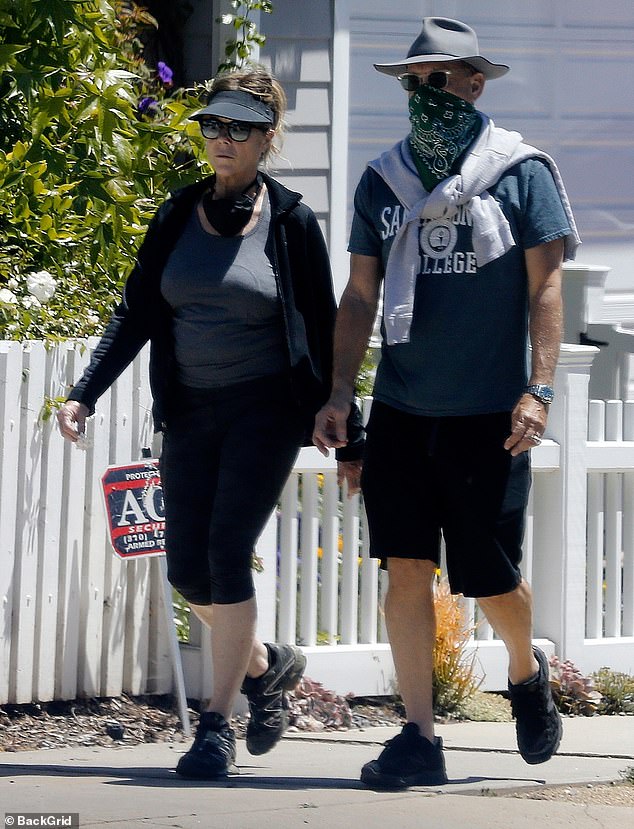 Spoke out: Hank,s who was seen wearing a face covering while out with wife Rita Wilson in LA on June 7, said it’s ‘common sense’ to wear a mask and social distance during the pandemic 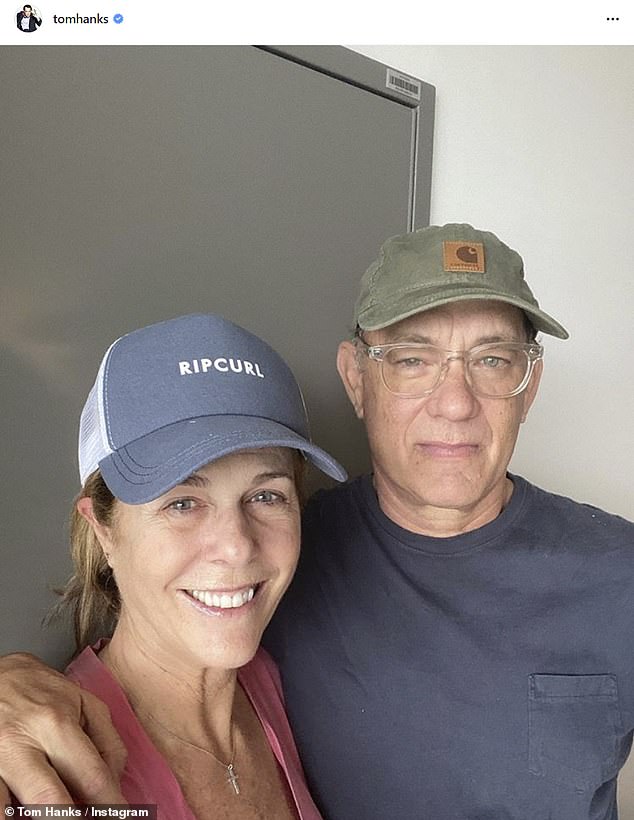 Tested positive for COVID-19: Hanks and Wilson contracted the coronavirus in March while in Australia, pictured. ‘We had about 10 days of very uncomfortable symptoms. Not life-threatening, we’re happy to say,’ Hanks said Tuesday

‘We had about 10 days of very uncomfortable symptoms. Not life-threatening, we’re happy to say,’ Hanks said of his and Wilson’s experience.

‘We were isolated in order to keep an eye on ourselves because if our temperatures had spiked, if our lungs had filled, if any number of things had gone wrong with this, we would have needed expert medical care. We didn’t.’

He went on: ‘I guess we were model recoverers from COVID-19, but we were also isolated so that we would not give it to anybody else that we came in contact with, and since then have been doing the same isolating, social distancing that is being asked of the world so, we are fine.’ 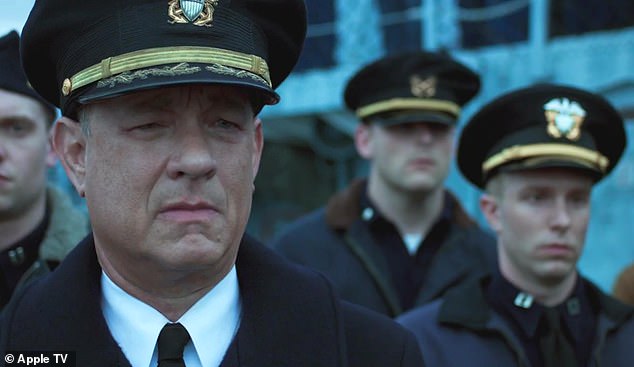 New role: Hanks made his comments  during a virtual press tour for his new movie Greyhound in which he stars as a U.S. Navy  Captain in command of an Allied convoy during World War II

His movie Greyhound, for which he also penned the screenplay, had been due for release in movie theatres in May but was pushed back to June 12 due to the coronavirus.

However, with movie theatres still shuttered in the main across the country, Apple purchased the film for streaming release on its premium subscription service.

The World War II story stars Hanks as a U.S. Navy Captain who is given command of a destroyer code-named Greyhound in his first wartime assignment.

Despite his inexperience, he finds himself in charge of an allied convoy that’s being stalked by Nazi U-Boats. 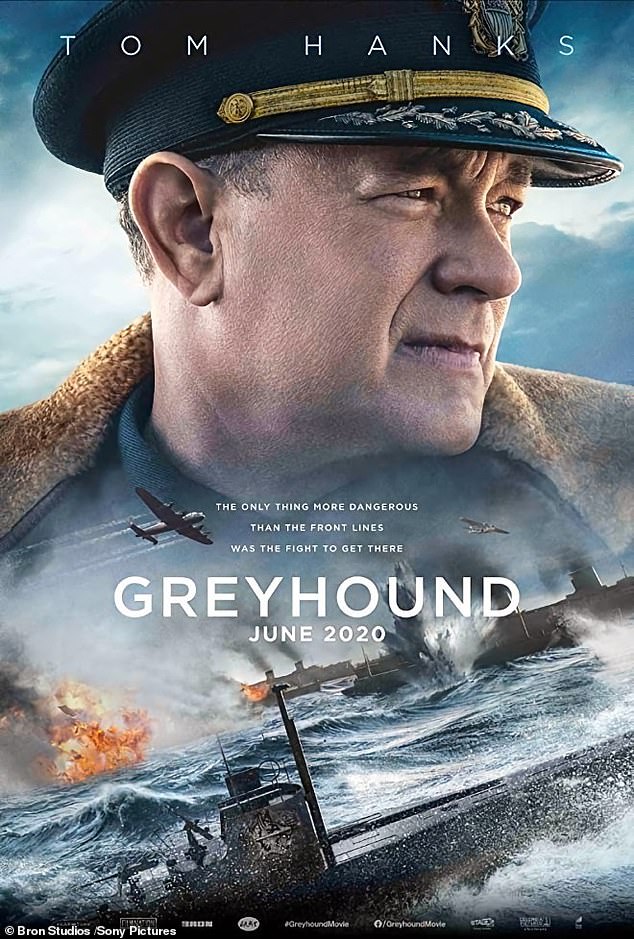 Coming soon: Greyhound was originally set to be released in theatres but as the pandemic continues, Apple purchased the film and it will premiere on Apple TV+ on July 10