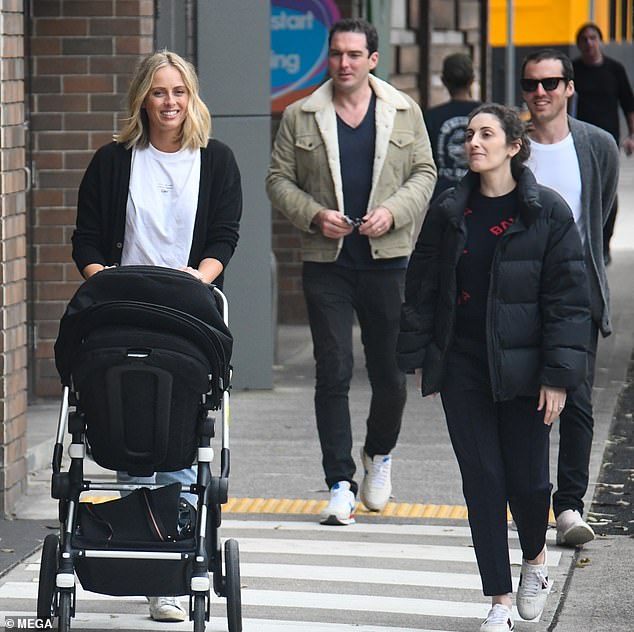 A family affair! Sylvia Jeffreys and Peter Stefanovic enjoy a stroll in Double Bay with four-month-old son Oscar – and are joined by his lookalike brother Tom and his wife Jenna

The adorable family was joined by Peter’s youngest brother Tom Stefanovic and his wife Jenna Dinicola, who are visiting from Queensland to meet their nephew.

Sylvia, 33, looked every inch the doting mother as she pushed Oscar along in their $1,100 pram.

A family affair! On Friday, Sylvia Jeffreys and Peter Stefanovic enjoyed a day out in Sydney’s Double Bay with his brother Tom Stefanovic and wife Jenna Dinicola

The Channel Nine reporter looked effortlessly chic in a casual ensemble for the outing.

She wore light denim jeans with a Camilla and Marc white T-shirt worth $150, and a black knit cardigan.

Sylvia let her natural beauty shine through with minimal makeup including a light foundation and touch of blush to highlight her stunning facial structure. 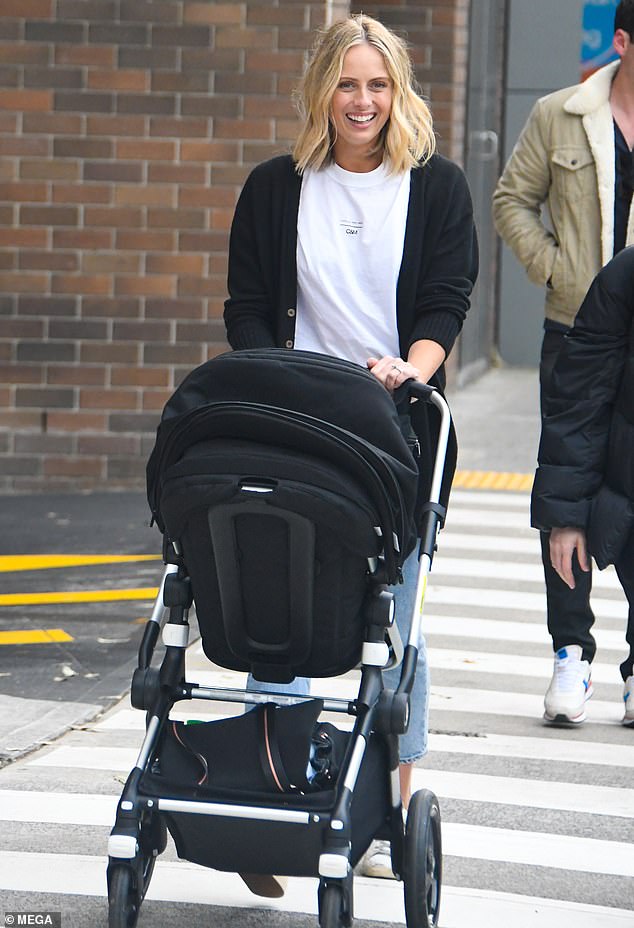 Doting mother! The Channel Nine reporter looked effortlessly chic in a casual ensemble for the outing as she pushed Oscar along in their $1,100 black and grey stroller

She wore her luscious blonde locks in tousled curls which fell casually at her shoulders.

Husband Peter tailed behind her in black jeans and a blue T-shirt he covered with a beige shearling jacket to rug against the winter chill.

Peter, 38, looked delighted to be catching up with Tom, who is the youngest of the Stefanovic clan. 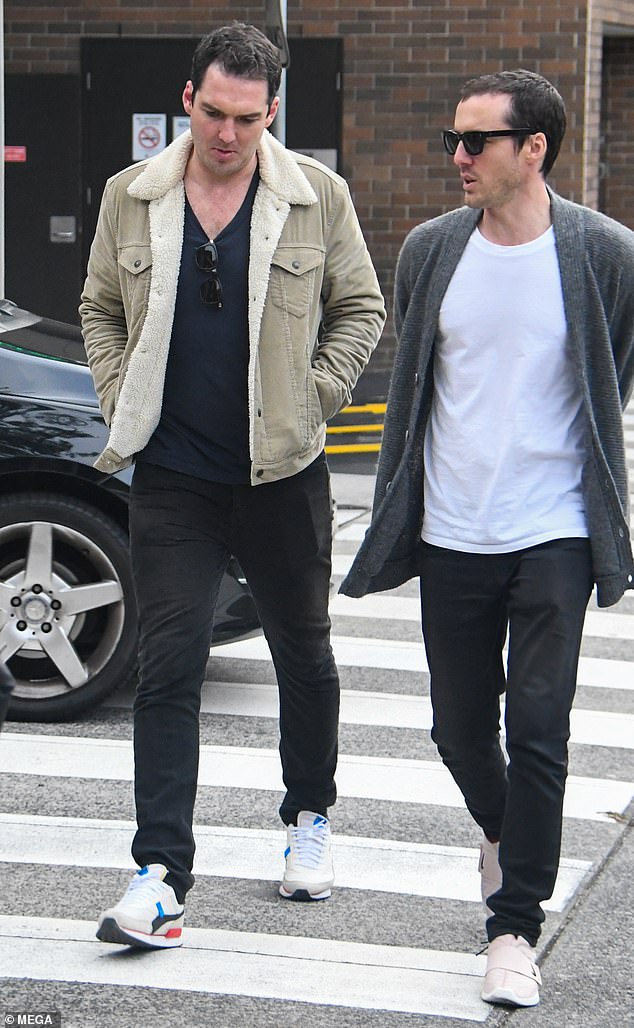 Two peas in a pod! Peter, 38, looked delighted to be catching up with Tom

Tom, who once worked as a Channel Nine cameraman and is now an almond farmer, looked relaxed as he walked alongside his Peter in black pants, a white T-shirt and grey cardigan.

Jenna proved she and her sister-in-law are great mates as they chatted happily upfront while the boys caught up.

Jenna wore an all-black ensemble, including pants and a logo Balenciaga sweater worth $1190. 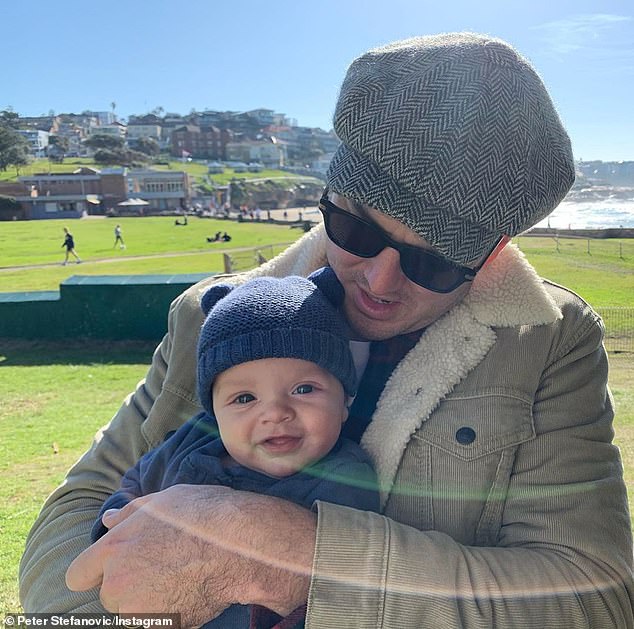 Meeting Oscar: Tom and Jenna were visiting to meet their new nephew Oscar, who Sylvia and Peter welcomed four months ago (Oscar pictured with Peter)

Visiting from the sunshine state, she appeared to still be adjusting to Sydney’s cooler climate and further rugged up with a puffer jacket.

Sylvia and Peter welcomed Oscar in February and announced the news on Instagram.

Sylvia shared a sweet image of their son in a blue onesie at the time and said that he has ‘deep blue eyes’ and is ‘perfectly healthy.’ 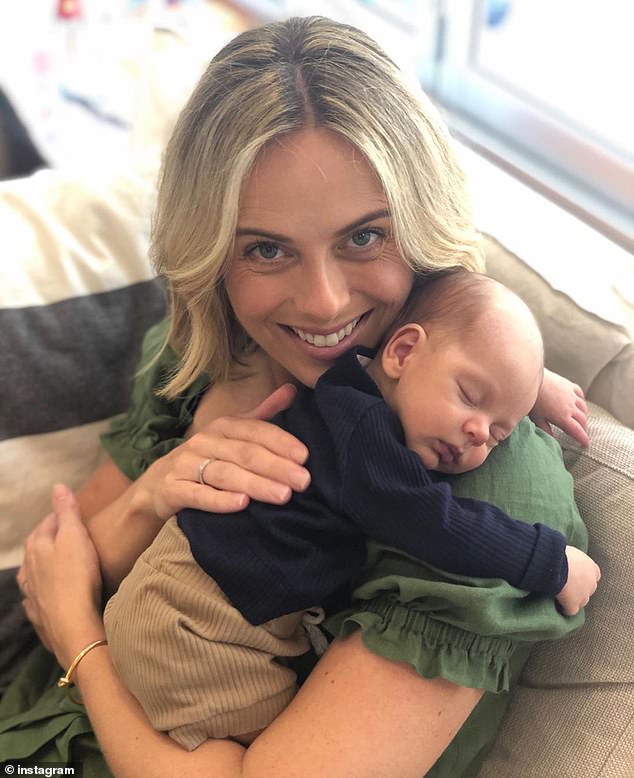