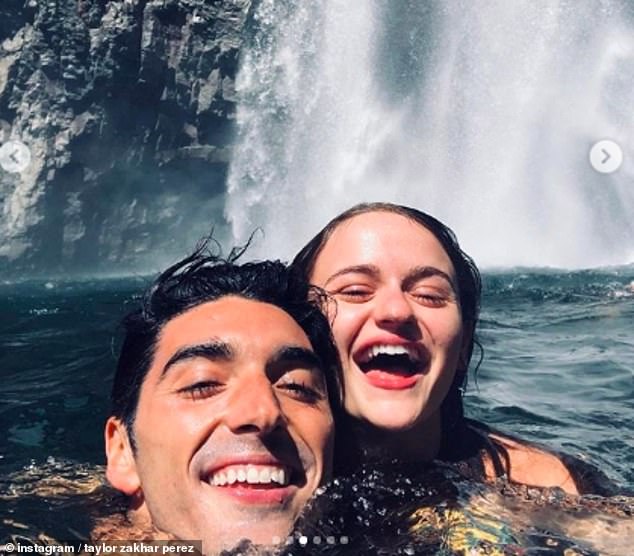 She’s been celebrating her 21st birthday in style.

And Joey King beamed as she took a refreshing dip in the water while enjoying a day out at a stunning waterfall with Taylor Zakhar Perez, 28, on Saturday.

The Kissing Booth co-stars are currently on a trip to celebrate the actress’ birthday and appeared to be in good spirits as they spent time together.

Having fun: Joey King, 21, appeared to be in good spirits as she went swimming at a waterfall with her hunky The Kissing Booth co-star Taylor Zakhar Perez, 28, on Saturday

In snaps shared from the outing Joey and Taylor cannot stop grinning as they smile for a selfie in the bright blue waters.

Taylor, who plays the character of Marco in the second instalment of the Netflix hit, exuded confidence as he showed off his ripped physique.

Showing off his bravery, Taylor also posted a short clip jumping into the lake and making a big splash as three pals watched from the side.

Joey and Taylor shared another glimpse into their funny friendship as they pulled funny faces while wearing comfy ensembles. 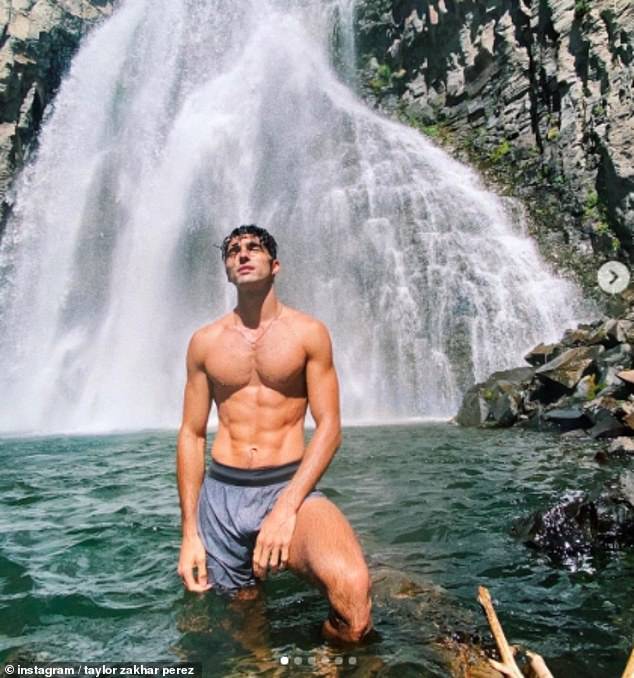 Looking good: Taylor exuded confidence as he showed off his ripped physique while posing in the clear blue waters 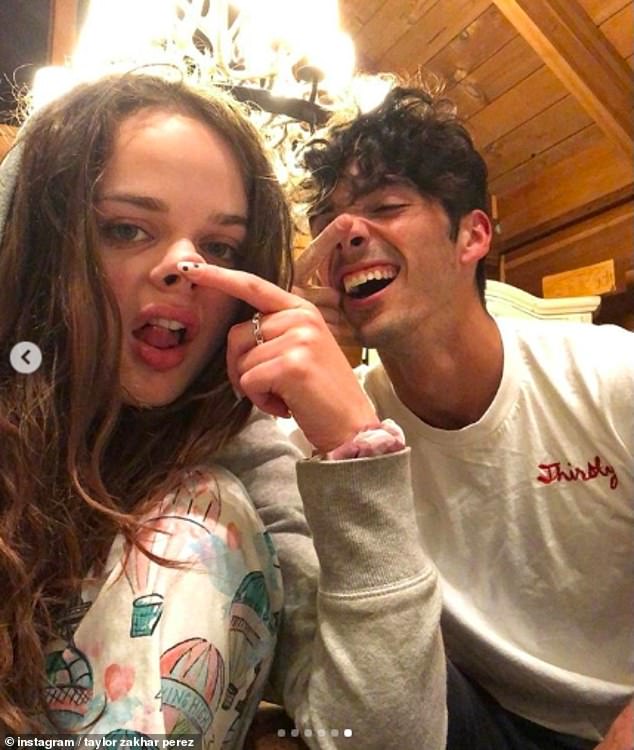 Larking around: The Netflix stars showed off their cheeky personalities as they pulled funny faces for another selfie

The actress wore her long brunette locks down and naturally curly while Taylor donned a white t-shirt with the word ‘thirsty’ embroidered in red on the front.

The trip comes after Taylor and Joey sparked speculation that they could be dating when he shared a gushing birthday message for the actress.

Taylor shared a sweet snap, and wrote in the caption that Joey ‘welcomed me with open arms and love’ when he joined The Kissing Booth.

He continued: ‘Honestly I could write about this woman all day. 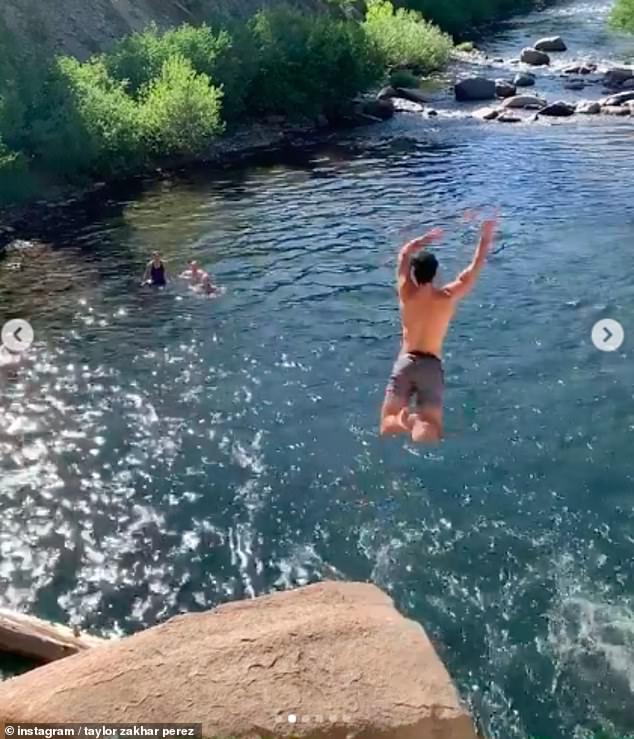 He’s brave! Taylor launched himself into the water during their stop at the waterfall 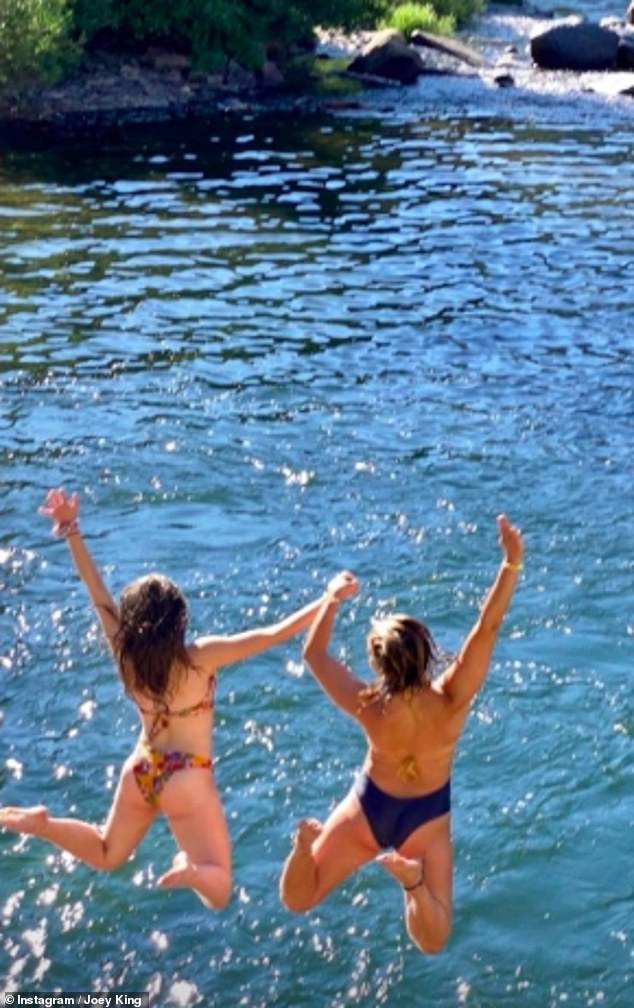 Off she goes! A bikini-clad Joey (left) also jumped into the refreshing water along with another pal

Staying safe: Taylor confirmed that he, Joey and their pals had covid tests which were negative before going on their roadtrip

‘She is the reason I joined the KB2 family, she welcomed me with open arms and love, she supported me, she pushed me, she made me laugh (like pee my pants laughter and had to check my underwear), she inspired me to be a bettter actor, she shared her family with me, THE LIST GOES ON. Grateful for you forever.’

The pair also posted pictures together after they had coronavirus tests so they could reunite for an at-home viewing party for the second series of The Kissing Booth.

‘Got tested just so we could hug today,’ the  Golden Globe nominee wrote under a sweet snap of herself wrapping both arms around the budding star.

MailOnline has contacted both Joey and Taylor’s representatives for comment. 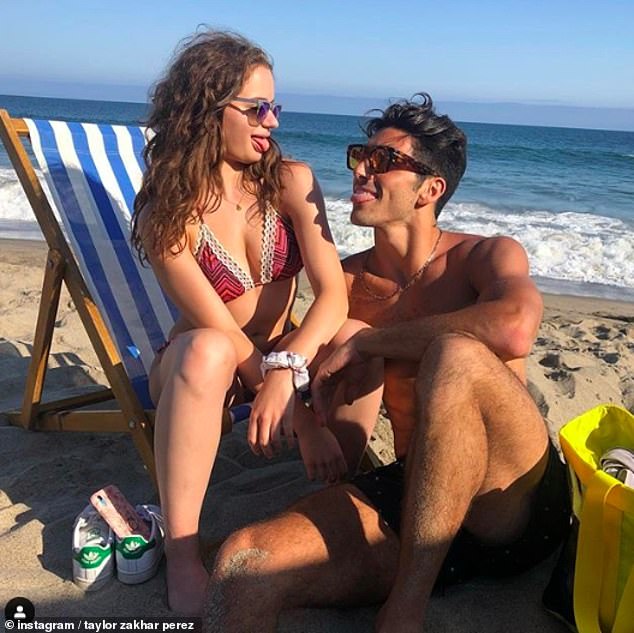 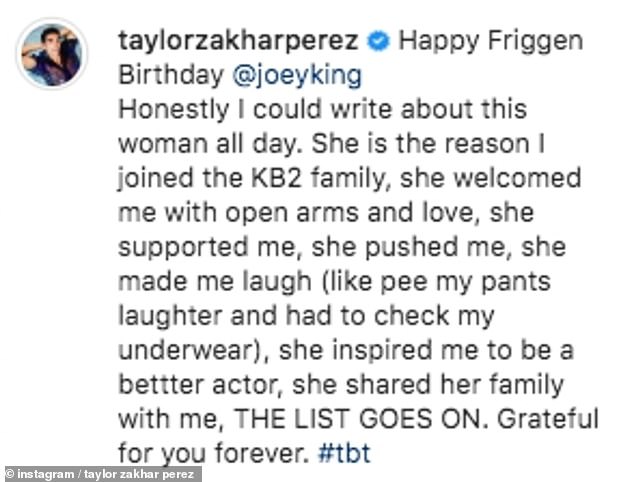 Sweet: The actor said Joey had ‘welcomed him with open arms and love’ when he joined the cast of the Netflix show

Joey has also been sharing her birthday celebrations on social media, posting a humorous snap with her in an empty bathtub filled with balloons, while holding a bottle of champagne.

She also shared some bikini snaps on the beach and even a ‘transformation’ photo that shows what she looks like as an old, balding, bearded man.

While the actress was largely obscured by the large balloons in the tub, she was wearing a tiara on her head with a white top.

One of the photos showed the jubilant actress popping the bottle of champagne with large 21 balloons floating above her. 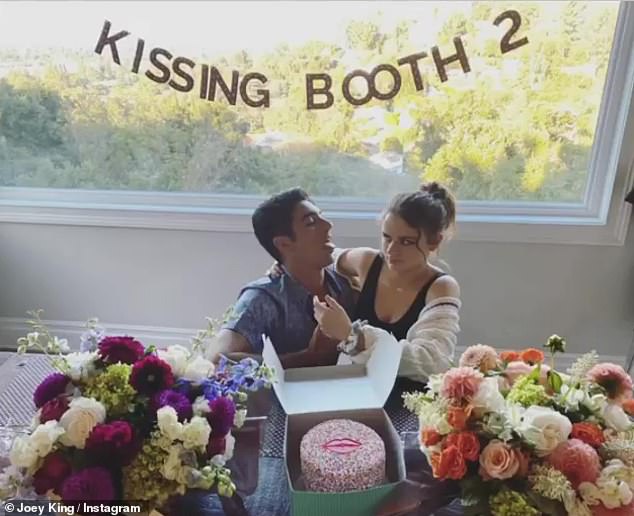 Funny: The hunky actor and Joey recently had covid tests so they could reunite for a Kissing Booth viewing party 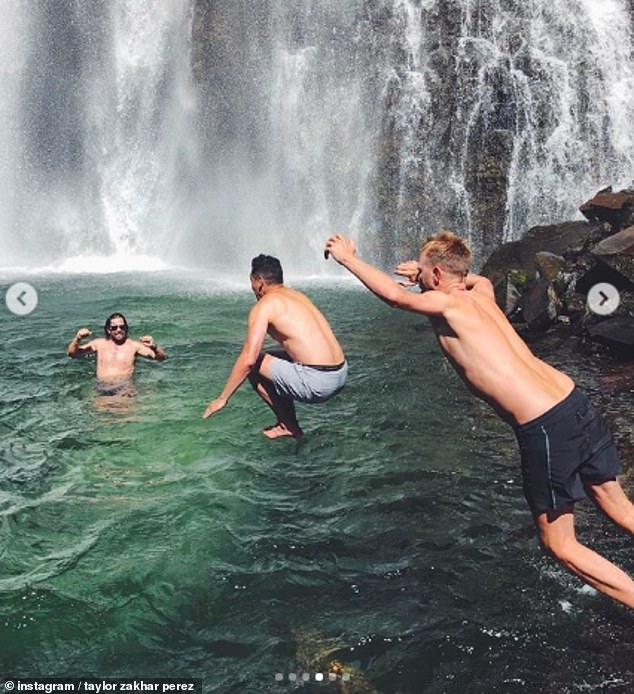 The gangs all here! Three other men joined Taylor and Joey’s celebrations at the waterfall on Saturday

Another shot showed her smiling at the open champagne bottle, while the fourth shot inexplicably showed her wearing a bald cap with a grey beard and a grey hoodie, taking a mirror selfie.

She also shared new snaps of her at the beach, rocking the same 21 tiara with a blue bikini with various pieces of fruit printed on it. 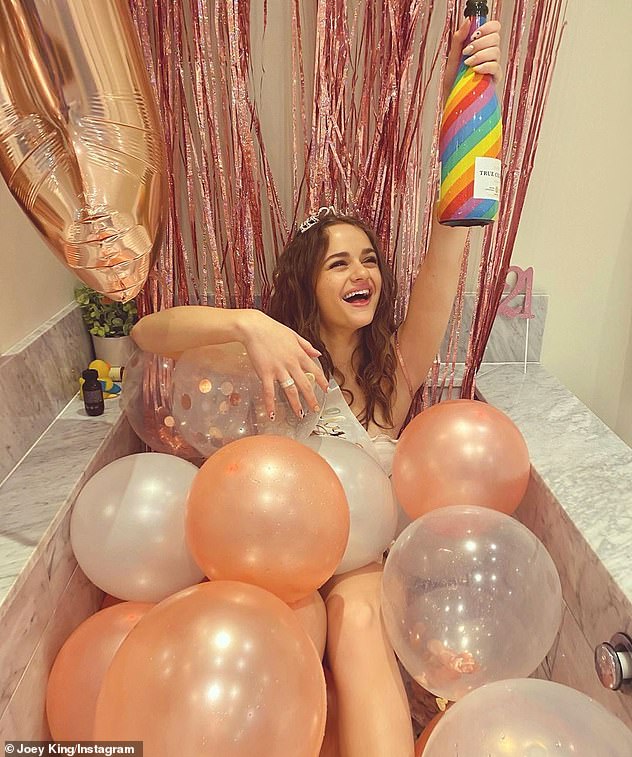 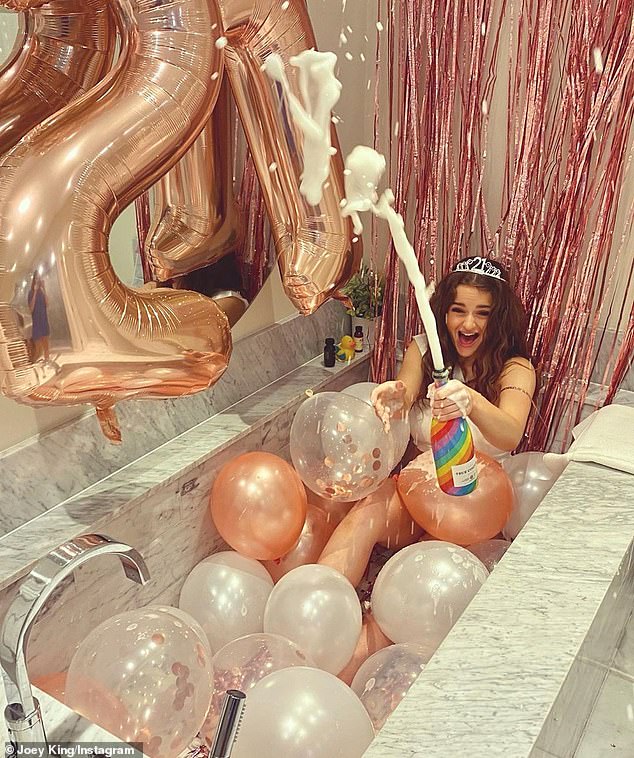 Popping bottles: One of the photos showed the jubilant actress popping the bottle of champagne with large 21 balloons floating above her

Her birthday comes just days after the release of her new Netflix film The Kissing Booth 2, and the actress confirming a third movie.

Joey was part of a live-streamed fan event for The Kissing Booth 2, alongside Taylor Zakhar Perez, Maisie Richardson-Sellers and Meganne Young last Sunday.

The cast members had a few surprises for the fans, one of them being that The Kissing Booth 3 has already happened, and it’s already been shot. 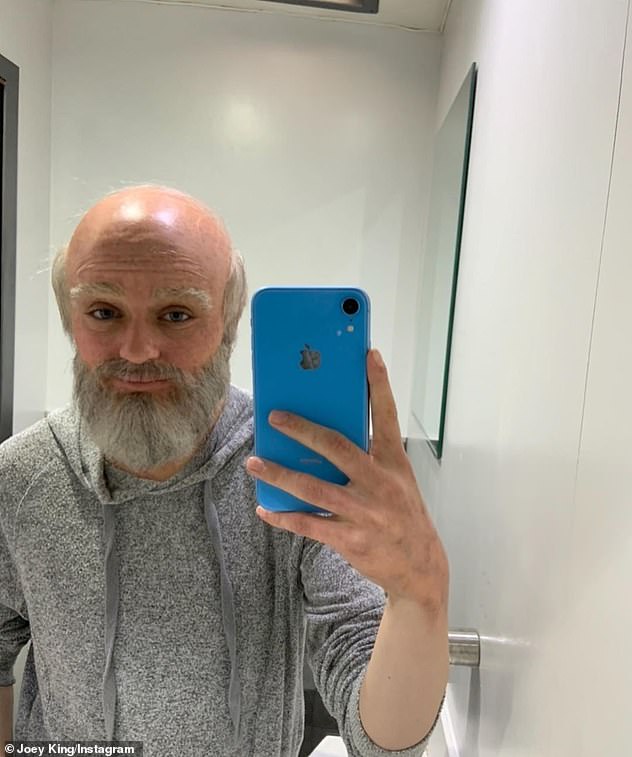 Old man: Another shot inexplicably showed Joey wearing a bald cap with a grey beard and a grey hoodie, taking a mirror selfie