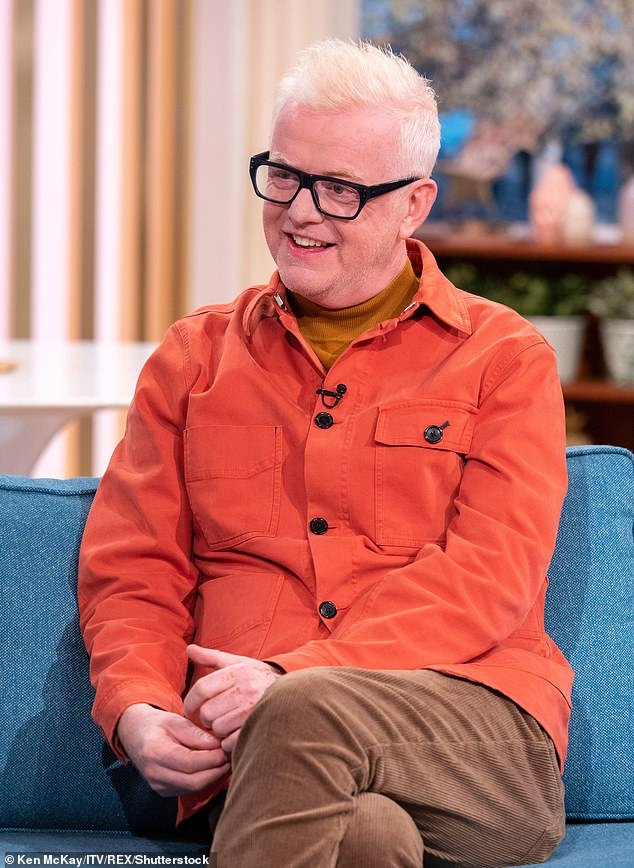 Chris Evans has admitted he is feeling ‘wobbly and weak’ and his been wearing adult nappies after undergoing surgery to have kidney stones removed.

The radio presenter, 54, returned to the airwaves on his Virgin Radio breakfast show on Tuesday, following a two-week break while he recovered from the condition.

Upon his return, Chris told listeners he was feeling ‘good but a bit wobbly’, as he thanked stand-in Sam Pinkham for his support while he’s been off.

He’s back! Chris Evans has admitted he is feeling ‘wobbly and weak’ and his been wearing adult nappies after undergoing surgery to have kidney stones removed (pictured in 2019)

Chris originally thought he was just suffering with trapped wind before being rushed to hospital in agonising pain, where he was diagnosed with having kidney stones.

Chris said: ‘Thank you Sam for everything you did over the last couple of weeks, not just on the air but off the air as well – super supporter.

‘He was very keen to see my grown-up nappies that I have been wearing and I have to say it’s not a look, but it’s a great vibe.

‘I was going to keep a pair on for today and just pretended that I still needed them but I thought that would be very bad karma because I don’t need them anymore.

Chris was later joined by his urologist Mr Jeetesh Bhardwa and they discussed what happened during his surgery. 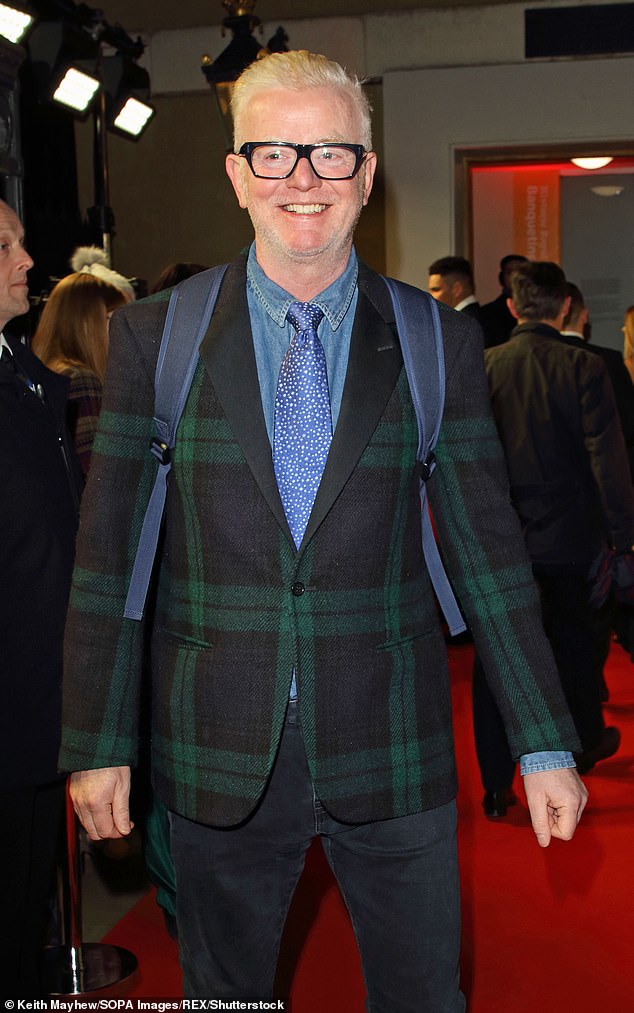 Stay: The radio presenter, 54, returned to the airwaves on his Virgin Radio breakfast show on Tuesday, following a two-week break while he recovered from the condition (pictured in 2020)

When asked how he is feeling by Mr Bhardwa, he said: ‘I feel really good. I still feel a bit wobbly and weak, is that to be expected?’

He replied: ‘Kidney stones are not to be taken lightly… it’s the smaller stones that come down the ureter and declare themselves that are painful.

‘And it’s the worst pain known to man. Sometimes the stones just stay in the kidney and they slowly grow for like a decade sometimes or some in five years.

‘I have some patients waiting to have major surgery and their stool is like five centimetres and yours was 5mm.

Last week Sam gave an update on Chris’ health, and said: ‘Loads of messages coming in for Christof, which is always lovely to hear because obviously you’re as concerned for him as we are.

‘Just to let you know what happened, he was taken into hospital last weekend with kidney stones. He was off last week hoping that they would pass naturally. 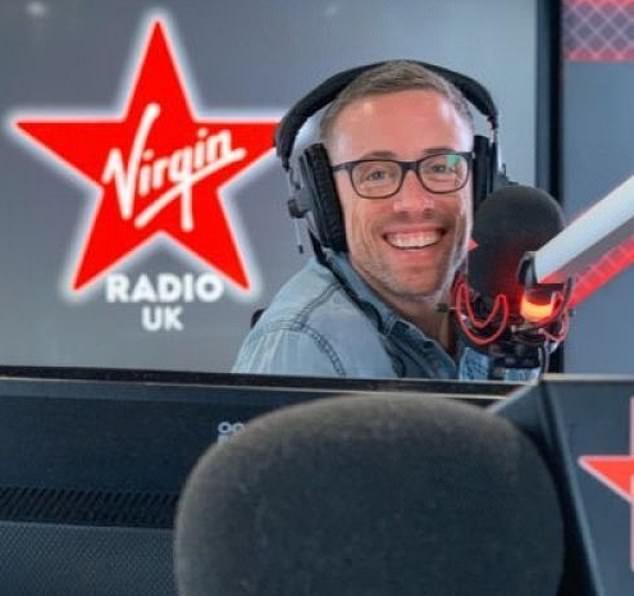 Sharing details of the Chris’s surgery, his stand-in Sam Pinkham said last week: ‘Last Friday he had a procedure using ultrasound to try and break them up but that hasn’t worked’

‘Whenever you tell people off air that Chris has got kidney stones, they all do the same thing and go: ‘Ooooooh’. ‘Women have said that passing kidney stones can be more painful than childbirth. So poor, poor Chris.’

Sharing details of the Chris’s surgery, Sam said: ‘Last Friday he had a procedure using ultrasound to try and break them up but that hasn’t worked.

Chris previously said he was rushed to hospital with kidney stones after mistakenly thinking he had a case of trapped wind.

He spent two nights in hospital following his trip to A&E with crippling stomach pains.

Speaking to The Sun, Chris told how ultrasound and CT scans showed he had a large kidney stone which doctors monitored for 48 hours before he was sent home on Monday.

He said: ‘I thought I had trapped wind and general ‘man pain’ most of Saturday. I took paracetamol and waited for nature to take its course…. that didn’t happen.

‘Late Saturday night my wife called 111 and we were advised to go to A&E. Which we did. After an ultrasound scan and CT scan, it was clear I had a kidney stone on the move.

‘I was subsequently admitted to a ward where I was looked after until I came back home on Monday evening. I still have the stone, and if it doesn’t come out soon I will need to go back in and have it removed.’

Chris described the doctors, nurses and other medical staff as ‘amazing’ and thanked them for taking care of him.

Kidney stones can develop in one or both kidneys and most commonly effect people between the ages of 30 and 60.

They can be extremely painful and can lead to kidney infections or the kidney not working properly if left untreated, according to the NHS.

Most are small enough to pass on their own but larger ones may need to be broken up or removed with surgery.

The star has sons Noah, 11; Eli, nine, and two-year-old twins Walt and Boo with his golfer wife Natasha Shishmania, 40. 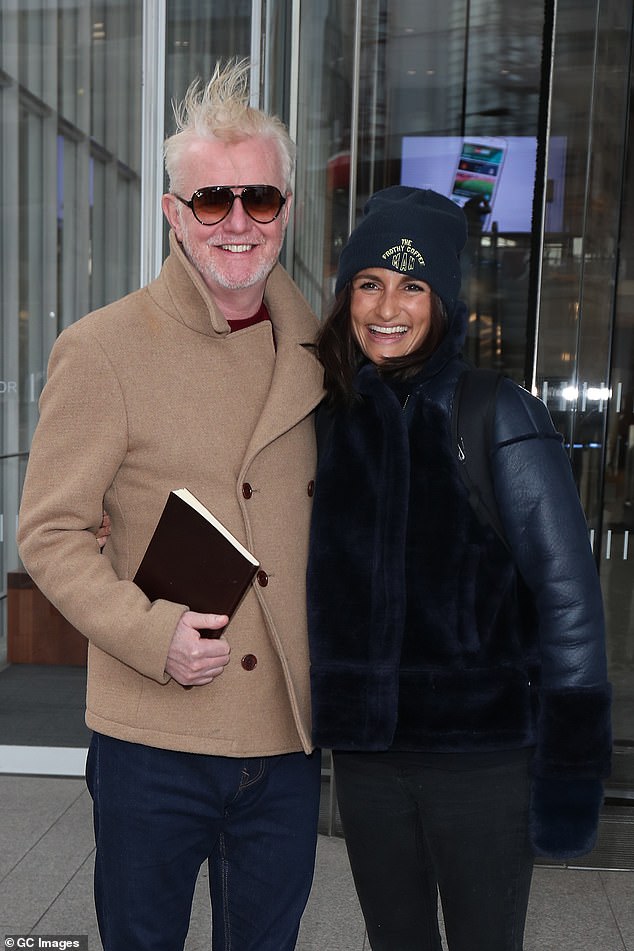 He said: ‘I thought I had trapped wind and general ‘man pain’ most of Saturday. I took paracetamol and waited for nature to take its course…. that didn’t happen’ (pictured with his wife Natasha Shishmanian in 2019)