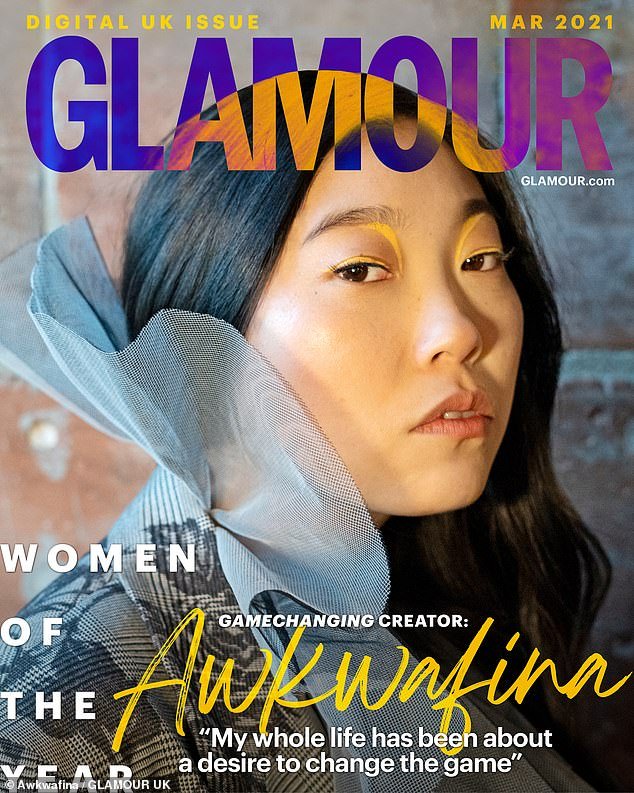 ‘Feeling different was a constant emotion’: Awkwafina says she was ‘saved’ by her creative talents after discussing her historic Golden Globes win in stunning Glamour shoot

By Laura Fox For Mailonline

Awkwafina has revealed she was ‘saved’ by her talent after years of ‘feeling different’ in a candid interview with Glamour Magazine.

The actress, 32, who made history last year as the first of Southeast Asian descent to win a Golden Globe for Best Actress in a Musical or Comedy, said that her incredible creativity has ‘given her hope’ and ‘instilled a sense of self.’

The interview comes after Awkwafina was named Glamour’s Gamechanger Creator in the publication’s 2021 Women of the Year Awards.

Stunning: Awkwafina has revealed she was ‘saved’ by her talent after years of ‘feeling different’ in a candid interview with Glamour Magazine

Awkwafina explained it took years for her to realise that she had to embrace her individuality after growing up feeling like an outcast.

She said: ‘Feeling different was always a really constant emotion of mine and talking to a lot of kids often they feel that way, too.

‘The main message that I want to give to those kids, because they might not see it now, is that those differences are going to set you apart. That’s a big message I wish I could have taught myself earlier.

‘Creating has 100% saved me. It’s given me hope, it’s instilled a sense of self that I was lacking as a kid.’ 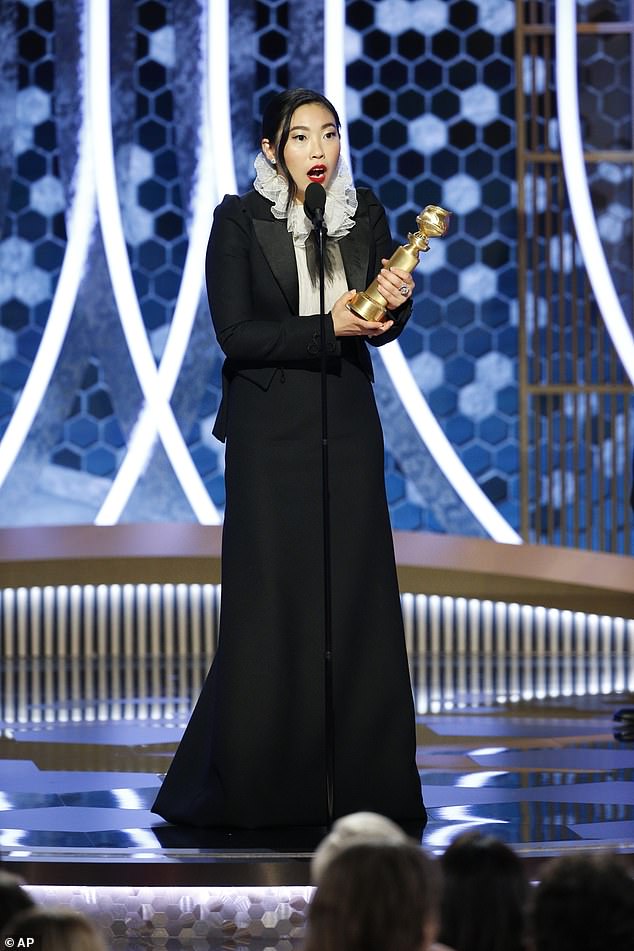 Wow! The actress also reflected on the historic moment she became the first of South Asian descent to win a Golden Globe for Best Actress in a Musical or Comedy

Asked whether she views herself as a gamechanger, the Crazy Rich Asians star added: ‘My whole life has been about a desire to change the game. When we dare to do so, we make a better game, and the cool thing is that the game will always keep changing.

‘I know that’s a lot of game references, but what it comes down to is the world is yours to change and to make an impact on.’

She went onto discuss the incredible moment she was awarded a Golden Globe last year for her leading role in The Farewell, the first time an actress of Asian descent had won in her category.

‘You don’t want to be the first sometimes and you just hope that there’s more. For me, when I saw people that looked like me on television, it opened up the world and what I thought was possible for myself,’ the star said. 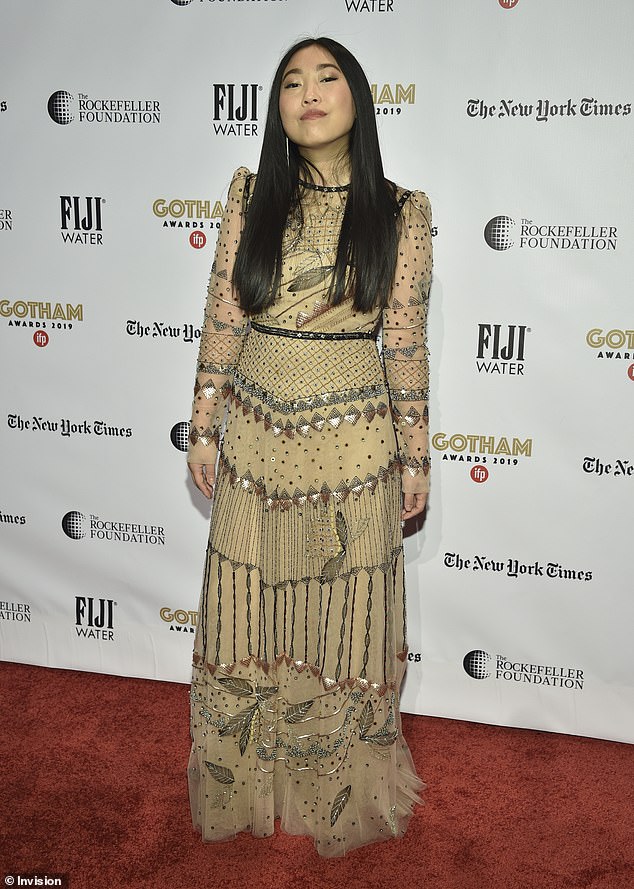 Standing out: Awkwafina explained it took years for her to realise that she had to embrace her individuality after growing up feeling like an outcast 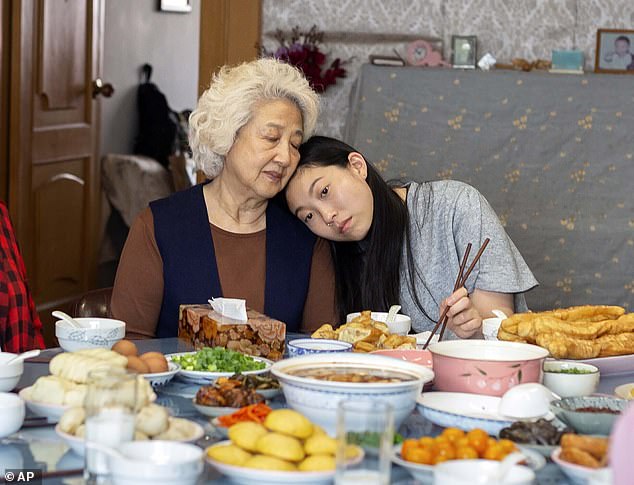 Praised: The star, who earned critical acclaim for her performance in The Farewell, added she’s had a lifelong desire to ‘change the game’ of representation

‘In everything that I do I want to clean up this area so that when the new generation comes in they have a happy playground and one that they can easily thrive in. If I was ever going to have a legacy, that would be it.’

Awkwafina is among a slew of female stars set to be honoured in Glamour’s 2021 Women of the Year Awards,

The ceremony will be hosted by comedian Katherine Ryan and filmed at The Court in London’s Soho, with all winners accepting their prizes virtually in accordance with Covid safety guidelines.

It’s already been announced that Little Mix have been awarded Gamechangers in Music, with other winners to be revealed in due course.

The GLAMOUR Women of the Year Awards 2021: The Gamechangers ceremony will be available to view on glamourmagazine.co.uk on Thursday 11th March at 7pm. 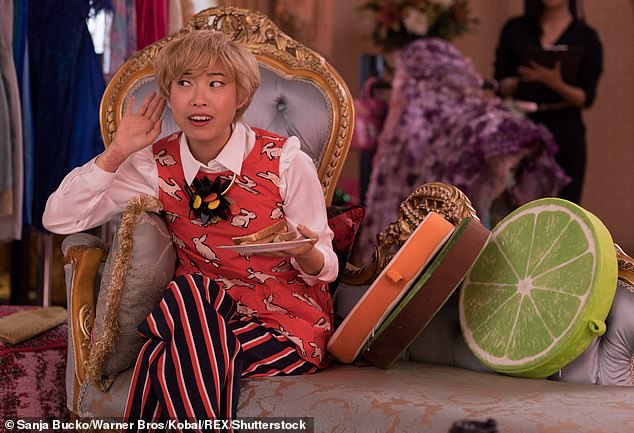 Beloved: Awkwafina was a breakout star in the 2018 comedy Crazy Rich Asians, and is among a slew of stars set to be honoured in Glamour’s Women of the Year Awards